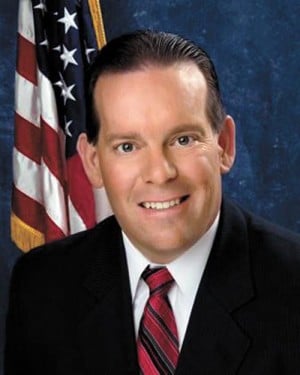 Warden Richard B. Ives
Richard B. Ives, warden at the U.S. Penitentiary in McCreary, Ky., will replace Warden Linda Sanders at the Lompoc federal penitentiary, a prison spokeswoman announced Thursday.
It will be the second tour of duty in Lompoc for Ives, who is expected to assume his new post in September, according to a statement from prison officials.
Ives has been with the Bureau of Prisons since 1986, and served at Lompoc prison from 1987 to 1994, when it became a United States Penitentiary.
He has been warden at the high-security McCreary prison since April 2011, having served previously as warden of the Federal Correctional Institution at Herlong, Calif.
Sanders, who served five years as warden of the Federal Correctional Complex in Lompoc, will serve to the end of July.
She will become warden of the United States Medical Center for Federal Prisoners in Springfield, Mo., effective Aug. 12.
Lompoc has been her longest tour of duty, Sanders said.
“It has been my longest duty station and one of my favorites. The institution has undergone a number of positive changes during my tenure, and I’ve enjoyed the opportunity to serve and be a part of it,” she said. “While Illinois is home, I will miss Central California and the Lompoc community.”
In Springfield, Sanders, who was the first female and first black warden at the penitentiary in Lompoc, will replace Warden Juan D. Castillo, who has been appointed director of the western regional office for the Bureau of Prisons.
The transfer to Missouri will return Sanders to a familiar region. Born in Mount Vernon, Ill., she was a student athlete at Southern Illinois University-Carbondale in the 1980s.
Sanders began her career as a correctional officer with the Federal Bureau of Prisons in 1987 at the Federal Correctional Institution in Sandstone, Minn., and moved to Lompoc in 2007 as her 10th institution.
U.S. Penitentiary, Lompoc, used to be a maximum security prison but now houses medium-security inmates. It is part of the Federal Correctional Complex, which also includes a minimum security federal prison camp and the low-security Federal Correctional Institution.