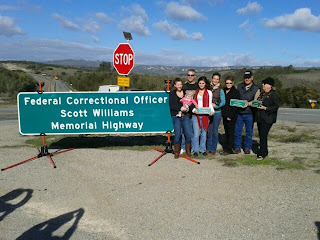 Over 14 years ago, Senior Officer Scott Williams was killed on duty at  the US Penitentiary in Lompoc, California after being stabbed by an inmate with a make shift knife. a second Officer was stabbed and three other staff were also injured by the same inmate, Roy Green.  You can read the BOP summary of Scott Williams' murder here.

The dedication ceremony for the Scott Williams Memorial Highway took place yesterday.  Thanks to Barry Fredieu and former Local 3048 Vice President and interim President, Theo Cintora for sending me these pictures of the sign and the ceremony.

In an email to me expressing his thanks for the unswerving dedication of Barry Fredieu and the assistance of the Council of Prison Locals, Theo Cintora said it best, "This will remind our staff and the community how dangerous our jobs are and the heroes that walk these corridors." 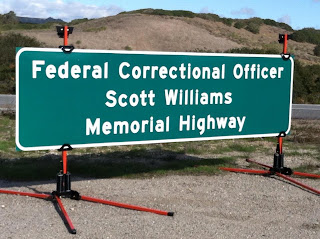 Posted by Michael Meserve, WXRVP at 5:17 AM