On Thursday afternoon, as his widow, daughters, mother and colleagues stood by, a portion of State Route 1 between Vandenberg Air Force Base and the turnoff to the Lompoc penitentiary at Santa Lucia Canyon Road was designated the "Federal Correctional Officer Scott Williams Memorial Highway."

"It's a very proud moment; it's very exciting," said Kristy Williams, the officer's widow and his Lompoc High School sweetheart, during the ceremony at Santa Lucia Canyon Road.


At the time of his death, the 29-year-old officer and Operation Desert Storm Marine Corps veteran was the father of 6-year-old Kaitlin and 11-month-old Kallee.

On Thursday his eldest daughter, now 21, clutched her own daughter, 5-month-old Raelee. Kallee Williams is 16.

"Most people do not know what goes on behind the walls (of the penitentiary)," Kristy Williams said. "I think it takes a very certain type of individual that can perform the job these men and women do every day. I think the fact that people driving by will see this, it gives them recognition. It's a very dangerous job. They go to work every single day knowing what happened to Scott could happen to them."

The night of Williams' death, April 3, 1997, inmate Roy C. Green strapped two homemade knives to his arms and stabbed the officer in the neck, then seriously injured another officer by stabbing him in the chest. Three other officers were slightly injured coming to their aid.

For most of the time since Williams' death, Mr. Green has been confined at a federal medical referral center in North Carolina. About a year ago, Mr. Green was civilly committed and will remain in Bureau of Prisons custody for the remainder of his life.

The installation of the two large green highway signs came at the urging of retired Correctional Officer Barry Fredieu, who seven years ago also had a park and statue dedicated to Williams near penitentiary staff housing.

Mr. Fredieu worked to have the highway designation approved via a state Senate resolution carried by Sen. Tony Strickland, R-Thousand Oaks, and Assemblyman Katcho Achadjian, R-San Luis Obispo.
As required by law, the $3,000 cost for the signs was paid with donations, including from Local 3048 of the American Federation of Government Employees, the California Correctional Peace Officers Association and the national peace officers' council.

Mr. Fredieu, who did not know Williams personally, said he's been a "crusader for justice" to ensure a lasting tribute is paid to the slain officer.

It is fitting, he added, that the signs are near Vandenberg, in tribute to the fallen officer's military background.
"He gave the ultimate sacrifice," Mr. Fredieu said. "He was a father. He was a son. He was a husband. He was a coworker. He was a hero and that's what he needs to be remembered as, a hero."

Aida Williams, whose third child is memorialized on the signs, clutched a small replica of the marker in her hands.

"I'd trade it all," she said, looking at the sign. "It changes everybody's life."

"For years, I couldn't come down this road because of the prison," the mother of four said.

"As a mother, it's very hard because it's not what you thought you'd have. You're supposed to go before they do."

She calls her son an "old soul," and said in the year before he died he made extra time for her.

"It's like he knew," she said. "I saw him the day before. He said, 'I'm really tired. I'd like to have some rest.' He told (his mother-in-law) the same thing the next day. And that night he was gone."

Mike DeGregorio, education specialist at the penitentiary, had Williams' initials and the date of his death, April 3, 1997, embroidered on a special jacket he wore to the unveiling.

"It means everything," he said of the sign, getting emotional. "He was great, really even-mannered, a really nice guy. It's a reminder, some guys go in and don't come out."

The new warden of Lompoc penitentiary, Richard B. Ives, told those gathered that the signs would help people remember the young officer.

"Unfortunately in the line of work we're in, we have bad days sometimes," Mr. Ives said. "And this was certainly a bad day. We don't want to forget that bad day. We'll be better because of what happened to Scott." 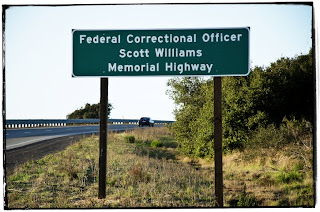 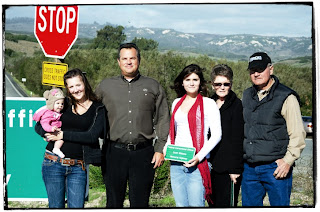 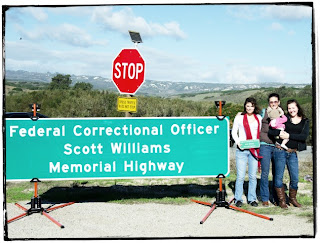 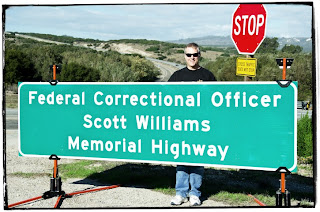