FCI Safford in the News 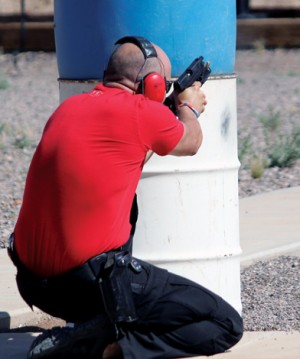 Pima Sgt. Sterling Shupe takes aim during the patrol handgun shoot.
Posted: Wednesday, May 16, 2012 12:00 am
By Jon Johnson Assistant Editor |
Not many people attempt to escape the federal prison south of Safford – and with good reason.
Current and former officers from the Federal Correctional Institute-Safford swept the categories at the fifth annual Shootout in the Desert law enforcement fun shoot Saturday. The shootout is open to all law enforcement agencies in Graham County and is the primary fund-raiser for the Graham County Sheriff's Office's college fund.
Law enforcement personnel from the Sheriff's Office and Jail, the Safford, Thatcher and Pima police departments, Arizona Department of Corrections and the FCI-Safford took turns battling to see who was the best shot in the Gila Valley while raising money for the Sheriff's Office's scholarship fund.
The smart money was on those with ties to the feds who have historically owned this event.
FCI officer Curtis Lawhorn took first place overall in the patrol rifle shoot, and retired FCI officer and current gun shop owner Quentin Kavanaugh took first place overall in the patrol handgun shoot and the sponsorship shoot. The two also teamed up to take first place in the team shoot.
Kavanaugh, who also filled in as range master for the event, has been selling weapons for 24 years but only recently opened his own shop (Q's Gun and Supply) south of Safford about two years ago when he retired from the prison. He praised the organization and enjoyment quotient of the event.
"It was a lot of fun," Kavanaugh said. "I think everybody had a good time."
As in the past, sponsors attended the shootout to show off their wares and allow the officers to experience something new. Officers had the chance to shoot a few weapons from PepperBall Technologies, but the highlight of everyone's day was shooting the M134A minigun brought out by Dillon Aero of Scottsdale that provides weapons for the United States Army. The minigun's name is really an oxymoron because the weapon is mounted on a trailer and shoots an astonishing 3,000 rounds pe rminute.
As per tradition, Sheriff P.J. Allred manned the grill during the shootout and cooked hamburgers and jumbo hot dogs for all to enjoy. He said it was his pleasure to be there in support of the event.
Money raised from entry fees help support the Sheriff's Office's college fund, which gives a scholarship to students from schools in Graham County and San Carlos.
Allred praised Jail Sgt. Michael Espinoza for organizing the event.
"He has done 99.99 percent of the work," Allred said.
This was Espinoza's second year as the event's organizer. He praised the sponsors for once again stepping up and enticing the officers to take part.
"This year, we had a lot of help (from) different agencies around the county," Espinoza said. "I really love what the sponsors have done for us. They're a big reason why we're able to generate scholarships for our local youth. . . It's a lot of fun. It's a lot of work but well worth it."
Results:
Patrol Rifle Shoot
Age 51 and over
1. Curtis Lawhorn *
2. Quentin Kavanaugh
3. Mayson Schultz
Age 50 and younger
1. Justin Hall
2. Michael Espinoza
3. Matthew Provencio
Patrol Handgun Shoot
1. Quentin Kavanaugh *
2. Curtis Lawhorn
3. David Morse
Age 50 and younger
1. Chris Palma
2. Nathan Lewis
3. Brandon Grissom
Team Shoot
1. Quentin Kavanaugh & Curtis Lawson
2. Nathan Lewis & Peter Roberts
3. Justin Hall & Andrew Shurtz
Family Team Shoot
1. Chris & Jennifer Lisenbee
2. Michael & Derek Espinoza
3. Matthew & Mikayla Provencio
Sponsorship Shoot
1. Quentin Kavanaugh (Q's Gun and Supply)
* denotes first-place overall