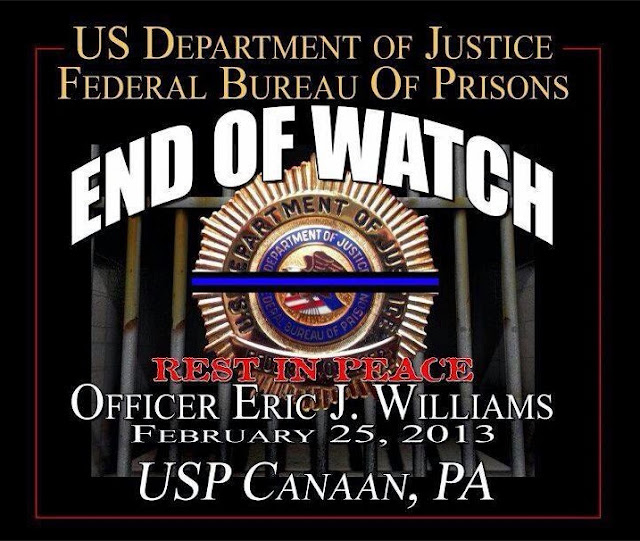 (Waymart) -- An inmate has killed a guard at a federal prison in northeastern Pennsylvania, marking the death of the first federal corrections officer killed on the job in nearly five years.

Prison officials say it happened last night at the Canaan penitentiary in Waymart, about 20 miles northeast of Scranton. Authorities say 34-year-old Correctional Officer Eric Williams was working in a housing unit when an inmate using a homemade weapon attacked him. Other prison staff restrained the inmate.

Williams was rushed to a hospital, where he was pronounced dead at 11:30 p.m.

Williams was from Nanticoke. He began his career with the Bureau of Prisons in September 11, 2011.

The high-security prison has been placed on lockdown and an FBI investigation is under way.

Officials did not immediately release details of the attack, including the inmate's name, the kind of weapon, or what, if anything, led to the attack.

An FBI spokesman in Philadelphia declined comment, saying details would be released when the inmate is charged. It wasn't immediately clear when that would happen.

Warden David Ebbert calls it "the darkest day in our institution's short history'' and says he's in shock over what he calls a "senseless loss.''

At least three inmates have been killed at the prison, which houses 1,350 high-security male inmates. A satellite camp houses 136 minimum-security inmates. The complex opened in 2005.

The Bureau of Prisons says the last time a guard was killed on the job was June 2008 in Atwater, California.

Peter J. Smith, United States Attorney for the Middle District of Pennsylvania, has issued the following statement about Williams' death:

"The staff at the United States Attorney’s Office for the Middle District of Pennsylvania extends its condolences to the family of Officer Williams, his coworkers and staff of the U.S. Bureau of Prisons facility at Canaan, Pennsylvania. This matter is under investigation by the FBI, with the cooperation and assistance of the Bureau of Prisons. Attorneys from the U.S. Attorney’s Office have been assigned to the matter.

“Last night’s tragedy is a devastating reminder of the dangers our federal prison guards confront every day. They work in some of the most dangerous and hazardous conditions to keep the rest of us safe. My thoughts and prayers are with the family and loved ones of Correctional Officer Eric Williams, who was killed in the line of duty at United States Penitentiary-Canaan. As a former county and federal prosecutor, I mourn with the entire federal law enforcement community and offer my deepest condolences, particularly to those at the Bureau of Prisons.

I will work tirelessly with the Department of Justice and the Bureau of Prisons through my capacity on the House Judiciary Committee and meet with local officials in Pennsylvania to fully investigate this incident and find solutions to prevent future tragedies.”

*This article has been amended to include updated information about Williams' death, as well as a statement from United States Attorney for the Middle District of Pennsylvania, Peter J. Smith.
Posted by Michael Meserve, WXRVP at 4:15 PM